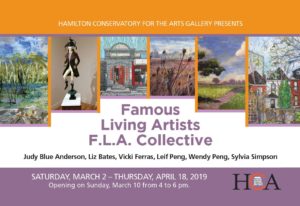 “In 1997, I moved across the city to South West Hamilton. My art was gaining interest and I was completing commissions. That fall, I attended the Dundas Studio Tour with friends.  I observed that no studio tour existed in Hamilton’s South West, despite knowing many artists who worked in their own studios.

“Artist Sandee Ewasiuk and I created the Hamilton South West Artist Studio Walking Tour. The tour was held every Mother’s Day Weekend. It was unique as people could walk the beautiful streets of the neighbourhood and visit artists working in their home studios.

“Over the 10 years, my artist friendships deepened. I had been travelling to the La Cloche Country Art School every year since 1992, and then in 2008 the artists began to join me for a week of plein air painting. After that, they were hooked and returned each year!

“The “F.L.A.” moniker really took off after I opened my Creative-Works Studio/Gallery in Westdale, when my assistant Melissa Visconti and I made the F.L.A. title of distinction stick. We began writing letters with the salutation “Dear F.L.A.” We greeted artists who came into the studio with, “Here comes a F.L.A.!” When we met for art openings at Creative-Works, we would welcome all artists with a joyous cry, “It’s a Famous Living Artist!”

“And so it follows, “…these are the artists in this debut exhibition of the F.L.A. Collective.”  Sylvia Simpson