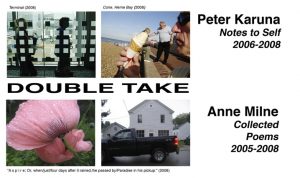 Peter Karuna - Notes to Self 2006-2008
A random selection of recent photographs that said more together as a group than I had anticipated.

Anne Milne - Collected Poems 2005-2008
This series of photographic diptychs works to suggest or evoke narrative and/or imagist structures that implicate the viewer in the process of creation.

Hamilton artist, Peter Karuna is an independent videomaker, installation artist, and still-photography instructor. His work has been shown nationally and internationally, and is in several collections including the National Gallery of Canada.