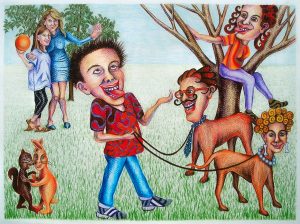 Feast your eyes on 16 watercolour pencil drawings and 5 mosaic wall sculptures in this exhibition. Ten of the drawings were created while I lived and worked at the Suncheon Namdo Guesthouse in Korea between 2013 and 2015. The City of Suncheon could easily be a twin city with Hamilton with its large bay and its abundant amount of migrating birds. The hooded crane, white napped crane and egrets appear in these works along with their natural environment of rice fields, marshland and mountains.

Over the summer ( 2017 ), I finished 6 detailed drawings. In figurative works, colourful patterns appear in each character's clothing. Beautiful, exotic patterns reveal themselves in a little bench from Korea, a wooden rooster sculpture from Thailand and a wooden Italian instrument called a sordine from the 17th century. Two of my new drawings were originally sketches for my mosaics. These reworked sketches will be paired up with the mosaics that were born from them.

Four of the five mosaics were displayed earlier this year at the Carnegie Gallery in Dundas for the first time. The fifth piece, "Thoughts That Grow" was made in 2005. Recently, I reworked the acrylic paint grout to give the mosaic some colour. This work will have a companion on the wall, a new drawing called "Something On My Mind" which has the same theme of thoughts growing into some form in the physical world.

Although the subject matter varies, the works will be displayed in two main groups; animals and people. They have a youthful quality showing individuals under 40 years old. Playful characteristics can be seen in each figure's face and clothing and in the cartoonish animals. There are lots of big smiles. And these works are intriguingly colourful. All of these birdie num nums are the seeds of my imagination. 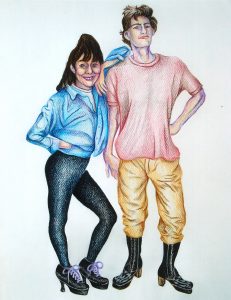 Since 1984, I have been working mainly in 4 mediums. Throughout high school and university, I worked on small soapstone and serpentine sculptures ( 1984 - 1992 ). Printmaking became my dominant medium at McMaster University in Hamilton ( 1987 - 1992 ). I produced prints up to 2001: some lithographs and etchings but mostly woodcuts. Between 2013 and 2015, I created over 40 detailed watercolour pencil drawings. From 1995 to the present, I have been working on mosaic wall sculptures. One can say that sculpture has been the main focus of my art career.


I have worked in different cultural institutions across Hamilton; the Carnegie Gallery, DVSA, Hamilton Military Museum, Hamilton Museum of Steam and Technology and the Staircase Cafe Theatre ( running its gallery space ). I have done much volunteer work; nearly 20 years with the Festival of Friends and I helped out at the Hamilton Artists Inc. doing Bingo fundraising and gallery duties. I have shown my art not just in regular galleries but in several alternative spaces across the city which include, cafes, shops and businesses.