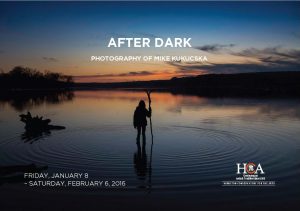 Photography for Mike Kukucska is a means of slowing the world down, just a little bit. Kukucska shoots primarily in long exposures to capture more than the eye normally sees – “I find that other worlds exist in everyday scenes that aren’t normally noticed in our fast-paced world.” Kukucska particularly enjoys shooting after the sun goes down, when people settle in for the night and different sounds ring through the air.

Hamilton and the surrounding area serve as a particularly rich environment for Kukucska’s numerous photography adventures. Kukucska’s photos capture the interesting textures, places and stories that Hamilton has to offer.

Mike Kukucska graduated from a technical theatre arts program at Niagara College in Welland, Ontario. He started taking pictures as a teenager some 30 plus years ago after saving up for his first camera. Kukucska has been featured on the front page of both the Hamilton Spectator and Urbanicity Magazine.