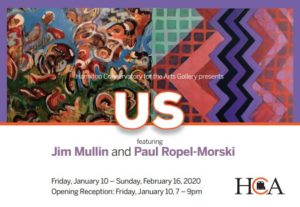 Born in Hamilton and graduated from the Ontario College of Art in 1988.  Jim has been exhibiting painting, drawing and sculpture since 1989. “The work being presented at HCA is recent paintings that are unusual for my work, in that they are based on personal experience in the landscape. This is my first exhibition of paintings with this subject matter.”

Paul was born in Hamilton and graduated from McMaster University in 1986.  His first solo show was at the Hamilton Artists Inc. in 1988 with many shows to follow throughout the 90s in Hamilton and Toronto. By the 2000's Paul was grappling with the territory between the real and non-objective. In 2011 the work took on what many called a more formalist non-objective approach.  Circular forms (Tondo's), ovals, and squares became an obsession; many of them dealing with the problems of negative space and how form interacts within that space. Colour and line became more vibrant while the works took on a more intimate nature in both scale and approach. Paul continues to live and paint in Hamilton.